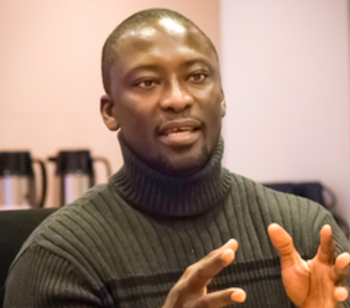 Summary: Thomas Bobby Smith is the founder for Hope for Lives in Sierra Leone (HFL-SL) - a nonprofit dedicated to providing hope, opportunity, sustainability and education for young people in Sierra Leone. He also focuses on the dangers of starvation and hunger. Both of which have become increasing problems in Sierra Leone with the country regarded by the Global Hunger Index as the 6th hungriest nation in the World in 2018. Not only does Smith speak and write about these problems, he also seeks resources and lobbies the government and foreign partners to provide needed services to Sierra Leoneans. He has lost most of his relatives including his father and other two family members in 2011.Smith has also lost his marriage for his decision to return back home and help his people. Nonetheless, Smith perseveres in trying to save young Sierra Leonean lives.

Profile: Sierra Leoneis one of six countries with alarming levels of hunger. Despite relative political stability and peace after a decade-long civil unrest, rampant poverty continues to leave Sierra Leone towards the bottom of the Human Development Index. Sierra Leone was hard hit by Ebola just a few years ago, which was quickly followed by widespread food shortages. The country continues to be impacted by flooding and mudslides, the most recent of which killed hundreds.

A substantial number of persons facing hunger in Sierra Leone are the youth. There are provisions in the country’s laws that make it incumbent on the government to provide food, security, social amenities to its citizenry, but many people still live in poverty and want of food. Mostly every citizen fends for him/herself. And the results are clear: Young and old people lying on footpaths, alongside roads for want of food, are progressively common sights.

In all of this, one person has at least dedicated his service to addressing this problem. Thomas Bobby Smith is the founder of Hope for Lives in Sierra Leone - a nonprofit dedicated to providing hope, opportunity, sustainability and education for young people in Sierra Leone. He also focuses on the dangers of starvation and hunger. Both of which have become increasing problems in Sierra Leone with the country regarded by the Global Hunger Index as the sixth Hungriest nation in the World. Smith is also a member of an experienced trauma team in the United States that has helped save hundreds of lives from gunshot wounds, car and motorcycle traumas, heart attacks, and many other illnesses and injuries. He has aided with surgical Orthopedics and Plastics procedures, and is a member of the Hazmat Decontamination Team at Suburban Hospital. Bobby was a Volunteer Fire Fighter and an EMT for many years and has also worked in the ER at INOVA Fairfax hospital in Virginia.

Says Smith, “Through HFL-SL, I have helped to provide fishing boats built for the community of Murray town in SL; purchased 2 outboard motors and shipped them to Sierra Leone. These fishing boats (a 3rd added in 2013) are feeding hundreds of people every time they return from their fishing expeditions.”

Smith's return to Sierra Leone in 2011, after a 20 year absence to attend the funeral of his father and 2 other members of his family was one of tragedy and hope. Still recovering from an 11 year civil war, the country was not the same as the Sierra Leone he remembered as a boy. What he witnessed, the friends and relatives he met during his short trip had a profound impact. He returned to the U.S. determined to help in whatever way he could

It is often a challenging crusade that warrants great commitment. Again, from Smith: “We have a country that has had a decade long civil unrest, Ebola Epidemic in 2014 and mudslides in 2017;all these further make it hard for the government to cater for all, regardless that we have been campaigning heavily in the media about the issues. The sad thing is, the problem of hunger is well known and it continues to hamper the growth and output of our young people throughout Sierra Leone.”

Since 2011, the efforts made by Bobby Smith and Hope for Lives in Sierra Leone have seen supports in millions of Dollars of medical supplies and equipment to support Connaught Hospital as well as assist in the efforts to control the Ebola Epidemic in 2014.Smith has built a first of its kinds library at his Childhood Scholl, St. Anthony’s Catholic School, followed by a computer lab. Thousands of meals have been served to school kids, homeless, amputees, hospital patients and staff. Over 40,000 (forty thousand) pairs of shoes distributed to kids and adults. Hand tools provided to a group that works with amputees.

Being part of the Healthcare community has given Smith a great source of pride and love for his efforts; saving lives and helping people is of paramount interest to Smith. Hope for Lives in Sierra Leone was created to help save lives in Africa and give Sierra Leoneans the opportunity for a better life.

Smith has not found much favor with some sections of the government. In particular, when he seeks to bring help to Sierra Leone, Government officials often throw spanners into his efforts, In 2015, for example, Smith had to fight for weeks to secure donated relief items from the Queen Elizabeth II Quay in Freetown; customs officials had demanded he pay a bribe to clear his containers of medical equipment and supplies, when, under the Government of Sierra Leone current Free Health Care Policy, there are no duties on such items. In 2010, when Smith decided to return back to Sierra Leone to continued his humanitarian work, his wife left him over his decision to come and help the needy and poor in his home country. Nonetheless, he is not intimidated neither deterred.

“I will keep on advocating towards a hunger-free generation in Sierra Leone,” asserts Smith, “talk less of the constant spanners thrown into my efforts.”