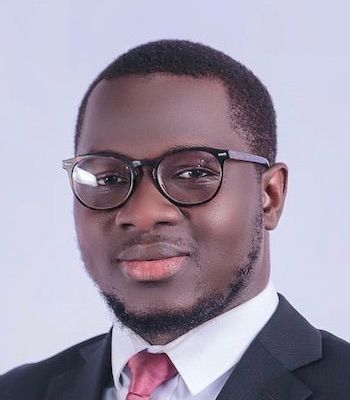 Summary: As a civil society and human rights advocate, Thomas Moore Conteh has been arrested, detained, and jailed by the Sierra Leone police for leading peaceful protests on education, police brutality, and non-payment of pensioners. Despite the arrests and threats, he continues to work with various organizations to represent disadvantaged and oppressed Sierra Leoneans.

Profile: As a civil society and human rights advocate, Thomas Moore Conteh has been arrested, detained, and jailed by the Sierra Leone police for leading peaceful protests on education, police brutality, and non-payment of pensioners. Despite the arrests and threats, he continues to work with various organizations to represent disadvantaged and oppressed Sierra Leoneans.

Conteh’s activism started in 2016 when he co-founded Citizens Advocacy Network (CAN), a civil society organization that promotes the ideals of human rights, rule of law, and democratic good governance in Sierra Leone. He is the current Executive Director of CAN. Due to his effective leadership, Conteh has succeeded in positioning CAN as one of the leading civil society organizations in the country. For example:

In September, 2018, government pensioners asked Conteh and CAN to intercede for them in describing their poor living conditions to the Government of Sierra Leone. Conteh showed the Government that the pension wasn’t just small but hardly sustainable; he demanded a more humane pension. The government finally obliged; many have subsequently found their pensions multiplied tenfold.

In February, 2019, Conteh confronted the Sierra Leone Police to protest a police shooting in the Ahmadiyya Secondary School in the east end of Freetown, an incident that left the principal of the school in a coma and three pupils injured. Conteh charged the police with “unprofessional conduct” but the police have still refused to cooperate.

In March 2020, disadvantaged students of Limkokwing University launched a peaceful protest over the Government’s refusal to honor its pledge to give them scholarship to pay their fees. For over two years, the government had turned its back on the students, forcing many of them to quit their studies.

So, who was going to stand up for these students? Thomas Moore Conteh decided to do something about it.

“I have been championing students’ welfare since my university days as spokesperson for National Union of Sierra Leone Students,” said Conteh, “I am still emboldened to continue my challenges. We have been calling out the government to make sure that all the affected students are considered and re-enrolled, but we had to finally get the attention of the President and his government to such a very grave concern, which seemed not to be paramount to them.”

On March 5, 2020, the Sierra Leone Police arrested Conteh and students of Limkokwing University who were protesting the government’s broken promises. The next day, Conteh was granted bail by a Magistrate Court in Freetown. He was later charged on three counts but the charges were later dropped for lack of sufficient evidence.

Because of pressure mounted by Conteh and CAN, the 1,200 students dismissed for lack of payment of fees were enrolled back into the university and the government agreed to a 50% discount on all fees.

All this championing of justice has come with costs.

“It has not been an easy journey so far,” he says. “I have been arrested for standing up for my fellow citizens, unlawfully detained, jailed, and arraigned in court. I have also received several phone calls from unknown assailants on a daily basis with threats of physical harm if I keep on fighting for the rights of my people. I have also been physically attacked, suppressed, intimidated, and suffocated by state institutions and government ministers that are supposed to protect citizen’s rights.”

Conteh continues to work with the Anti-Corruption Commission, the Human Rights commission of Sierra Leone, and the Legal Aid Board in demanding transparency and accountability. He believes he has the support, confidence, and trust of the people of Sierra Leone, irrespective of the attacks, obstacles, and other dangers he continues to face.