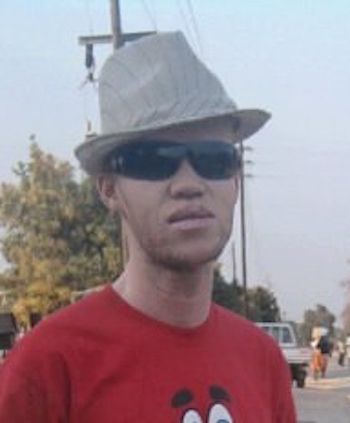 Tinashe Nyahasha is a young man with albinism who works tirelessly to inspire, inform and demonstrate to society the limitless potential of children and adults with disabilities. He founded the Theodora Foundation, named after his mother (who had two sons with albinism). The Foundation works to encourage, support and inform parents and guardians of children born with albinism and other special needs and to help them to properly care for and support these children physically, materially and psychologically

Even though the Theodora Foundation is now a fully-fledged non-profit organization, funding the work is hard: Nyahasha uses his personal resources, even selling his car so that he can achieve his goals. Much of the fight has been to overcome bureaucratic bottlenecks; the issues he deals with are not regarded as an important crosscutting issue and he’s had to fight to get recognition from relevant authorities. He’s also faced resistance from people in high offices who believe that they are the only ones with expertise and/or experience to define and deal with the problems Nyahasha and his Foundation seek to address.

Nyahasha was inspired to found his Foundation by a visit to Hwedza (a rural community in Zimbabwe) where he had accompanied a friend to visit a sick relative. What he saw shocked him and will remain with him forever. The man they visited was an albino and he had developed a very serious cancer which resulted in him losing one of his eyes and having an open wound in his abdomen among other terrible sufferings. On enquiry, Tinashe discovered that this man had never been informed of the need and methods to protect himself from the sun, so he was left particularly vulnerable to cancer.

Because of this visit, he said, “I was immediately consumed with the desire to learn more about the living conditions and the ‘internal environments’ of all special needs people in Zimbabwe and to share my and my mother’s experiences with these people and their families. The more digging I did, the more shocked and appalled I got about how little is out there for people with any kind of special conditions, especially children. I was even more saddened by what's inside these same individuals--their attitude, self-perception, ambition or lack thereof,” Nyahasha relates.

He does not particularly believe in throwing money or any other material resources at problems, especially problems of the nature that he discovered in his research. He says lasting solutions will only come when individuals with disabilities develop a powerfully positive attitude about themselves and their present and future roles within their societies. Development of such an attitude cannot happen in isolation. “Society, particularly the family unit,” Nyahasha says, “needs to view people with disabilities not as disabled but in the right light of equality.

Nyahasha tours the country, inspiring people and establishing and supporting “inclusion committees” in local communities to facilitate making the disabled full members of their communities. His Foundation publishes accurate information in vernacular on the proper care of children with particular disabilities, and initiates dialogue and trains others to facilitate dialogue across all sectors of local communities. Theodora, his mother, continues to be a strong pillar of support as she volunteers to counsel parents with children with different disabilities who approach the Foundation.