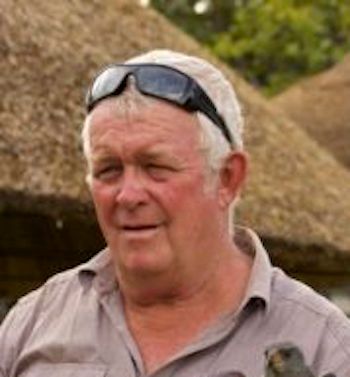 Summary: Trevor Lane established and manages the Bhejane Trust, a nonprofit group that seeks to protect elephants, rhinoceroses, and other large mammals in Zimbabwe parks. Lane and his colleagues have built wells so that animals don’t die from droughts, and they have campaigned against poachers. Lane has been threatened by these poachers more than once, but he remains resilient in helping the police find, arrest, convict, and imprison them. Over the past several years, Bhejane has helped save thousands of animals’ lives.

Profile: At least two factors are contributing to the deaths of African elephants, rhinoceroses, and other large mammals in Zimbabwe and neighboring parts of Africa. One is the environment: These animals don’t have enough water to survive. And the other is poaching: People make lots of money from killing large animals and selling their tusks.

Trevor Lane is determined to reduce, if not eliminate, both of those factors.

Several years ago, Lane and a fellow conservationist established the Bhejane Trust (“Bhejane” is a Ndebele name for “black rhino”), a nonprofit group funded by donors whose primary goal was to monitor—along with other organizations—the black rhino population in the Sinamatella area of Hwange National Park. Since then, however, Bhejane’s goals have expanded, and so have its successes.

On the environmental front, the Trust has drilled hundreds of boreholes so that mammals have enough water to survive. For example, in 2017 it drilled a borehole in Hwange National Park that would produce 15,000 liters of water per hour. The former pumps couldn’t come close to meeting the demand, particularly during the dry season from August to November. As a result, many animals perished from drought-related causes—620 Cape buffaloes in 2015 alone. Now it’s much different: “Up to 500 elephants come for night drinking,” says Lane. “We are now pumping slightly over one million liters of water daily for more than 8,000 elephants and other animals.”

Soon, Lane discovered that his—and Bhejane’s—assets were much in demand; drilling boreholes was only the beginning. These days he assists the National Parks and Wildlife Authority of Zimbabwe in not only the resuscitation of old boreholes and the drilling of new ones but also the installation of pumps, the transportation of diesel to pumps, road development, fire management, monitoring of game populations, mapping, and, yes, anti-poaching.

On the poaching front, the poachers are shooting animals and also introducing cyanide to water holes frequented by elephants. Over the past few years, 240 elephants—as well as hyenas, wild dogs, lions, and kudus—have died from cyanide poisoning.

Lane and Bhejane have helped police capture poachers, but it’s not an easy job. For one thing, poor farmers can get $300 for a single elephant tusk, so they definitely have a financial motive to poach and to protect the identity of other poachers. For another, there is a worldwide market for tusks and other parts of animals, and Lane knows that the trade in ivory is huge: “Mining directors, top officers, and even disgruntled rangers have all been implicated in poisoning.”

Furthermore, poachers do not take kindly to people who want to disrupt their trade, and they have threatened Lane on numerous occasions.

He, however, remains steadfast: “I fully know,” he says, “that poachers do not like our initiatives, but we will continue to work on towards the safeguarding of all wild animals, no matter the risks encountered.”

There have been successes. Poachers have been arrested, convicted, and sentenced to years in prison. Lane has implemented programs to alert locals about both the dangers of poaching and the benefits of preserving wildlife. And African parks are seeing a resurgence. As the Bhejane Trust website states, funding makes it possible for conservationists and wildlife enthusiasts to “enjoy this rare and exciting opportunity to experience the real Africa of vast, remote places, and to actively assist in the conservation and survival of the magnificent wild animals which inhabit this wilderness.”