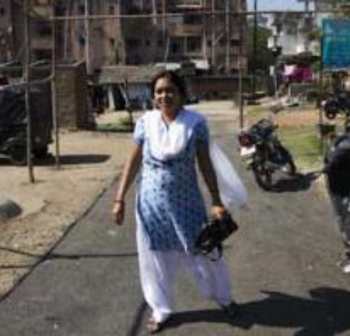 Sometimes when an entire community is being brutalized, it takes just one brave person to turn the situation around. For 15 years the mud alleys of the main slum in the central Indian city of Nagpur were ruled by a thug named Akku Yadav and his band of killers, rapists, and extortionists. The slum residents are of the Dalit caste-untouchables-and their complaints were never taken seriously by the local police. The criminals were from a higher social rung than their victims and besides, they had the money to pay baksheesh--bribes.

One woman of the slum said that when she went to the police to complain that she was gang-raped by Akku Yadav and his goons, she was then gang-raped by the police. There's a long list of such accounts, each more horrifying than the one that precedes it.

Into this chaos stepped Usha Narayane, a 25-year-old Dalit woman who had grown up in the slum and who had-against all odds-gone away to school, studying hotel management. Narayane, about to embark on a professional career, was visiting home on a school holiday when the family living next door to her own was attacked by Yadav's thugs. The gang warned Narayane not to go to the police-but that's exactly what she did.

Yadav returned with 40 men. They surrounded the Narayanes' shack, and Yadav brandished a bottle of acid, saying he would mutilate the young woman's face before he raped and killed her. She barricaded the door and turned on the gas, threatening to blow everyone up if the gang broke into the house.

The thugs backed off, and other slum residents, watching this drama from the street, took heart at seeing that one woman's stand had defeated the gang. That day community members actually burned down Yadov's house, and he turned himself over to the police--for protection.

When the thug who had terrorized them for so many years appeared outside the courthouse, there were over 200 women waiting, and they cut him down in the street, using their shoes, their kitchen knives, and handfuls of cayenne. His police escort fled.

Although she wasn't even present at that lynching, Usha Narayane was one of the women the police arrested for it afterward. The case has never come to trial, but Narayane's life is forever altered. She is still under police surveillance, unable to leave Nagpur, and she'll never be able to pursue the career she planned in hotel management. She has, however, found a new calling: she's now a community organizer.

Narayane founded and directs the Kasturba Nagar Community Project. With support from the M. Night Shyamalan Foundation, this project is giving both entrepreneurial and skill-specific job training to 250 women from the neighborhood. They're learning computer work, clothing design and manufacture, catering, baking, and food processing.

Providing first an impetus to protect themselves and their children, and then training for good jobs, Usha Narayane is a champion for people who had no one before she stepped forward, taking a giant step for her fellow "untouchables."

There are updates on this work at the website below.