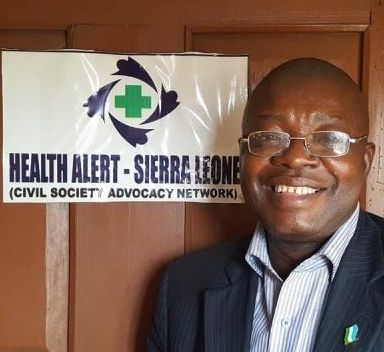 Summary. Victor Lansana Koroma is the founder and Executive Director of Health Alert-Sierra Leone, an organization committed to helping citizens—especially women and children—obtain access to free health care products and services. Some of Koroma’s campaigns have challenged the government, and as a result, he’s been verbally attacked and received death threats.

Profile. Victor Lansana Koroma fights for the health of everyone in Sierra Leone; that is not an easy endeavor, and sometimes it’s not a safe one, either.

Being a member of the medical profession himself. Koroma has experienced the difficulties and challenges within that sector first-hand. Before 2010, Sierra Leone had no free health care regime for its citizens. Accessing health care services in Sierra Leone was not only expensive, but a luxury to many impoverished households. Many citizens could hardly afford proper medical care.

In 2009, the United Nations had labeled Sierra Leone as the unhealthiest place in Africa for giving birth. That same year, Koroma founded Health Alert-Sierra Leone (HA-SL), calling on the government to ensure that mothers and babies didn’t die because they couldn’t afford health care. So HA-SL advocated for adequate government funding of health facilities and infrastructure, the reduction of high drug costs, and the monitoring of the distribution of medicines, including the elimination of barriers to access to health care facilities and treatment for mothers, pregnant women and children under five. It was successful. The following year, Sierra Leone launched its Free Health Care Initiative.

It soon became apparent to Koroma that he couldn’t continue practicing as a Public Health Nurse, State Registered Nurse, and Higher Public Health Officer while simultaneously advocating for reforms in the medical profession. So he eventually decided to give up the former and focus on his role as an activist. He led a “Take No Bribe for Free Health Care Drugs” campaign, for example, which sought to curtail the misuse of the distribution of medicine and services. He also brought attention to government officials in the Health Ministry who were diverting free health care drugs for personal gains; the officials were summarily arrested and dismissed.

Koroma has not limited his advocacy to health care. In 2014, he initiated a “Clarion Call on Operation Potholes”, which sought to investigate why millions of Leones assigned to fix potholes under the jurisdiction of a Minister of Works went missing. He has also campaigned for public safety and human rights.

All these advocacies have sometimes led to dangerous consequences. Besides being occasionally disparaged by former colleagues, Koroma has received numerous death threats, some of which were so serious that the President of Sierra Leone asked him to take refuge with the Inspector General of Sierra Leone. Koroma declined, saying “The Good God is my security, and I know my work is for the people of Sierra Leone, and posterity will prove me right or wrong.”

Because of Koroma’s efforts, Sierra Leone has made significant improvements in its health care policy.Nonetheless, the few Government hospitals and peripheral healthcare units across the country are overburdened, and corruption remains in the management of its health care policies. Pregnant women, lactating mothers, and children younger than five still struggle to obtain their rightful services. Koroma’s argument is clear: “The Free Health Care Policy should be enjoyed by all and free of corruption.”

Despite intimidation and threats, Victor Koroma continues with his quest for free and accessible health care for everyone. He sums up his service this way:

“I still have some great friends who call and tap me on the back saying, ‘You are doing a great job’, and because of that, when I feel distracted either by negative propaganda or otherwise, I am reminded of those who truly believe and benefit from what I do. My responsibility as a lone voice for thousands of women and kids who are unable to pay for medication keeps me going, and I am not ready to stop.”