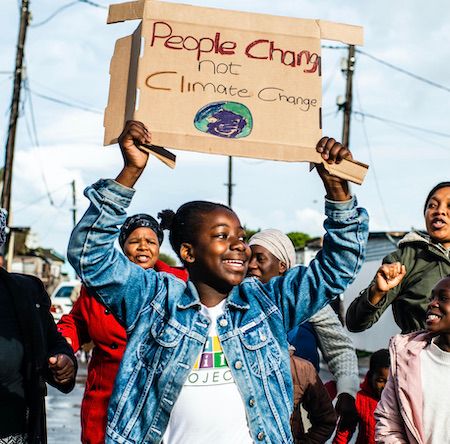 Summary: South African teenager Yola Mgogwana mobilises young people to fight for environmental justice in Khayelitsha, a settlement 30 km southeast of Cape Town. Her activism started when she joined Earthchild Project, an initiative that teaches youths to defend the environment. Today she runs the Green Environment, a project that inspires children to love nature and also to prepare their own food. Because of her work, Mgogwana has little time to play with friends or even to learn in school. Faced with these challenges as well as the constant threat of cyberbullying, Mgogwana nonetheless vows to continue spreading awareness—“until the government does the right thing”.

Profile: It was during an Eco Warriors session, a learning program organised by EarthChild Project, when Yola Mgogwana learned the link between climate change and poverty. Since then, the South African girl has committed to fight global warming and climate change, through training and raising awareness.

“There was this day when our lesson was about climate change,” remembers Mgogwana. “It was my first time hearing terms like ‘climate change’ and ‘global warming’, and I learned that the hardships that me and my family and the community where I live, and other people in the world face, are rooted and caused by climate change.

“That is the day I told myself—since now I know I will not keep quiet and sit down—‘I will spread awareness and educate people.’”

She has certainly done that. In 2019, Mgogwana participated in a climate action project organised by African Climate Alliance in partnership with Fridays for Future. She seized the opportunity to address over 2,000 learners in Cape Town, highlighting the dangers of climate change and the role of young people in addressing it.

“I nominated myself to be one of the spokespersons speaking for the young black voices living in poverty,” she says. “Who would have thought an 11-year-old from Khayelitsha would stand up in front of 1,000 people and say ‘Enough. We demand change now’? I did it, and I'm very proud of myself.”

In an act of commitment and discipline, Mgogwana enrolled in the Eco-Warriors for Climate girls program. The program, organised by Earthchild Project, educates people about local and global environmental issues and shows them how to take action.

But that was far from the end of Mgogwana’s activism: “I then started my own group, called ‘Green Environment’, for young children between the ages of 6 to 9 years. We meet twice a week to talk about our environment and also do fun activities. My aim is to inspire them to love nature and also teach them how to prepare their own food, by taking nutrition issues into our own hands.” (In a country where a significant number of its citizens battle with obesity, learning what to eat is an important practice that can help to save lives.)

Mgogwana’s work is not easy. She has sacrificed in pursuit of her goal:

“When I have to give a speech or attend a conference, I spend a lot of time writing and memorising my speech, and that takes a lot of time and energy. I have to miss playing outside and having my friends over so I can focus. When I am travelling, I sometimes miss school and exams, meaning I always have to work extra hard to meet my school deadlines and balance my activism plus school work.

“My life revolves around my activism, ranging from attending webinars, meetings, doing research, and studying, plus running my eco club. Some teachers were hard on me because they didn’t understand my work and purpose.”

Though Mgogwana has not faced any attack related to her work, she doesn’t know what the future holds. She is aware of a young climate activist in India who suffered cyberbullying.

As far as being ignored by South African officials as well as the general populace because of her age, Mgogwana has a terse rebuttal: “My age does not mean my views on the world are not valid.

“I will never quit or surrender. I will keep on marching, shouting, and spreading awareness until the government does the right thing.”