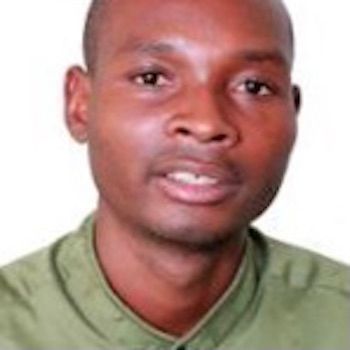 Summary: Youngerson Matete is a youth activist and founder of Project Launch 263, a nonpartisan and youth-driven organization that seeks to mobilize young people in both urban and rural settlements in Zimbabwe and to educate them on the importance of participating in the electoral process.

Matete has met with severe and often physical resistance from government supporters, having to escape certain events because of attacks from his perceived opponents. Nonetheless, he continues to reach out to millions of young voters before the next election.

Profile: Next year, Zimbabweans will elect a new President: Incumbent Emmerson Mnangagwa will compete against opposition leader Nelson Chamisa. Mnangagwa, who came to power in 2017 following a bloodless coup that ousted his mentor and strongman Robert Mugabe, has been accused of inheriting—and keeping—the brutal policies of his predecessor.

Scores of human rights activists are languishing in the country's notoriously dingy prisons, and the economy has taken a bad turn as inflation hovers above 200%. Many Zimbabweans are craving for change, but analysts have raised a red flag: Young people have not registered to vote in the numbers needed to make their voices heard: According to the country's statistical body, ZimStats, young people below the age of 35 constitute about 60% of the population; failure to register to vote disenfranchises them from electing leaders of their choice.

It is against this backdrop that Youngerson Matete and his Project Launch 263 campaign are trying to influence youths to be proactive in national affairs—including registering to vote and then actually voting. Project Launch 263 is a nonpartisan, youth-driven organization that seeks to mobilize young people in both urban and rural settlements and educate them on the importance of participating in the electoral process.

Through this ambitious project, Matete intends to influence and mobilize close to three million young voters before the end of the year; so far, the organization has reached seven out of ten provinces in the country.

Unfortunately, Matete’s efforts face a myriad of challenges. Zimbabwe’s toxic and politically polarized environment—which is heavily biased toward the ruling party—does not embrace such “new ideas” and is quick to label Matete’s supporters as “Western-driven” and “regime change sinister”.

Because of those prejudices, people such as Matete face overt dangers, including physical harm and arrest by the authorities. Earlier this year, whilst addressing a youth community group in Gokwe—a ruling party stronghold—Matete was forced to quickly flee and abandon the meeting as scores of government supporters besieged the venue. It is often difficult to get a police clearance in certain areas of the country; as a result, many events have been cancelled.

Despite the dangers, Matete is determined: “I have taken it upon myself to help mobilize young people in the country to register to vote, and if we fail to do so as young people, old people will continue to determine our destiny. It has been difficult, especially in rural areas, to mobilize, since we are viewed as regime change elements and at one time we had to flee a marauding gang of youths who chased us out.

And his message is clear: “I will not be forced to stop spreading the message of voter registration until the youths in this country come out in their numbers and register to vote. We have a responsibility to take this country forward. Otherwise, we will continue to sink. . . . Young people are locomotives of change, and we implore them to be the change they desire and present them for public office because we believe that young people are leaders of today and tomorrow and 2023 elections will be won by the youth vote.”