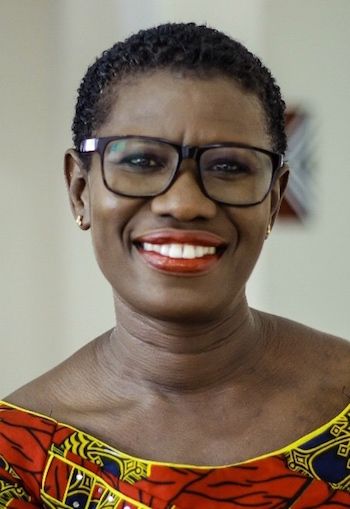 Summary: During and after the vicious, decade-long civil war in Sierra Leone, Yvonne Aki-Sawyerr for years has helped former child soldiers, displaced women and children, and orphans and their caretakers rebuild their lives. Yvonne joined the fight against Ebola in August 2014, joining others who placed themselves at risk to help combat the highly infectious virus. Most recently, she led the President’s Delivery Team, coordinating an investment programme in sectors including education and health to support to the country’s citizens and to counter the effects of the Ebola epidemic.

Profile: It was 1999, and the vicious, decade-long civil war in Sierra Leone was winding down. Yvonne Aki-Sawyerr, a native of Sierra Leone, graduate of the London School of Economics, who was working as a finance professional in London, knew she had to act. She founded the Sierra Leone War Trust (SLWT) to help those affected by the war—especially women and children—rebuild their lives.

Remaining connected to her homeland throughout the ten years of violence, now she was back, and amongst others, she chose one of the toughest, most dangerous groups to help: child soldiers who had been conscripted into the war. These children were violent and unpredictable but many also had heart wrenching stories that revealed their own vulnerabilities. As she recalls, “Working with child combatants was one of the most difficult things I have done, the trauma of these boys and girls who experienced violence and inflicted violence was overwhelming”.

Aki-Sawyerr’s work wasn’t restricted to this group. She and SLWT, the charity she co-founded continued to work for years—building wells, a school, a health centre; nurturing displaced women and children; and coordinating with other organizations to provide free education for disadvantaged girls. During this time, Aki-Sawyerr travelled back and forth between Sierra Leone and London where she continued to pursue her career.

As if this was not enough, Yvonne joined the fight against Ebola in August 2014. At the time of the outbreak, Yvonne was in the United Kingdom with family, but upon learning about the outbreak, she initially campaigned in the UK to raise awareness and solicit international support for Sierra Leone. Despite the risks, she later travelled back to Sierra Leone where she joined Sierra Leone’s National Ebola Response Centre. The Ebola virus is extremely contagious, and family and friends urged her not to go. Yet she went: “I found myself unable to sit back and watch the suffering of my people from afar – I felt compelled to be on the ground and play whatever part I could in fighting this scourge.”

In March 2015, Aki-Sawyerr and SLWT expanded their charitable work to provide financial, educational, and nutritional support to 50 orphans of Ebola who were living with caregivers—covering school costs, visiting the children’s homes and schools, and giving the caregivers skills training and cash transfers so they could either invest in businesses or further their education. Since 2016, Aki-Sawyerr has been the Delivery Team Lead for the President’s Recovery Priorities, an investment programme in sectors including education and health to support the country’s citizens and to counter the effects of the Ebola epidemic.

Yvonne Aki-Sawyerr has risked her life and spent countless hours giving support to Sierra Leone and its citizens. Even when she was in London, she says, “My heart is always with home.”