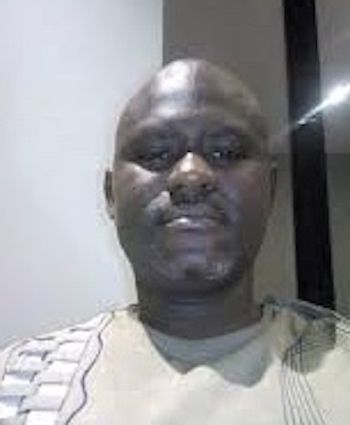 UPDATE August 2021: Since attaining a Giraffe Hero status some couple of years ago, civil society champion Joseph Sannoh has continued to stick his neck out for the truth, even if it costs him his livelihood. He is not ready to back down.

Following his strong advocacy for fellow citizens on consumer rights as provide for under Sierra Leone’s National Telecommunications laws, Sannoh was appointed by the government of Sierra Leone in 2018 to serve as Commissioner on the National Telecommunications (NATCOM) Board, a move which many saw as a means to silence the vibrant civil society activist. But Sannoh saw it as a unique opportunity to be more vocal and outstanding

In March, 2021, Joseph Sannoh was fired from his office as Board Member of NATCOM, following reports of a big rift between himself and the Government. Sannoh had openly condemned a decision of a government minister and accused State House of complicity in alleged corruption taking place at the Ministry of Education where the Minister is said to have appointed his younger brother to a senior post.

A press conference was held in Freetown at the Sierra Leone Association of Journalists Office. Sannoh had video and audio evidence of his chrges which angered State House, prompting the President to sack him.

Sannoh against all the odds, continues to speak up for justice.

Summary. Joseph Sannoh is the founder and Executive Director of Help Ease Agony in Life-Sierra Leone (HEAL-SL), a nonprofit organization that focuses on education. Sannoh has long played an active role in advocating for students’ rights, including access to quality education, enhancing learning conditions, and campaigning for the reduction of tuition fees. Some of Sannoh’s crusades have exposed government corruption in the education sector, and as a result he has been threatened, physically assaulted, and evicted from his home.

Profile: Joseph Sannoh is an educator, in every sense of the word. In 2013, he officially began his crusade for better education in Sierra Leone when he founded and became Executive Director of Help Ease Agony in Life—HEAL. His first effort: ensuring that Sierra Leone knew exactly how many people were born each year. As he pointed out at the time, “One cannot carry out development in a country without knowing the number of people.” He had to challenge the government to accomplish that, but eventually Sierra Leone implemented a Universal Birth Registration.

Next came a focus on disabled people. Sannoh orchestrated “Disabled Got Talents,” an award ceremony showcasing efforts made by the disabled community. After that, Sannoh approached the Education Minister to lament the fact that, following the outbreak of the Ebola disease, schools were interrupted and children were staying home, receiving no education at all. The minister said that there was nothing to do about it. Sannoh disagreed. He designed Education by Radio and Television, which coordinates radio and television stations with teachers so that students can learn from broadcasts.

There’s more, of course. Sannoh continually calls for increased government funding for education, improved infrastructure for schools, better curricula, and the reduction of tuition rates. Eventually, largely as a result of his efforts, Sierra Leone introduced Free Quality School Education for all. As recently as 2018, Sannoh and HEAL launched its third Education Trade Fair, focusing on career counseling, reproductive health, and governance; it reached over three million pupils nationwide.

One issue that has always concerned Sannoh is corruption, and there has been plenty of it in Sierra Leone’s educational system. Sannoh discovered and then exposed the tampering of funds by officials of the Ministry of Education, Science, and Technology. As a result, he was expelled from the School Teaching program. “In Sierra Leone,” said Sannoh, “government institutions can assist you to carry out an activity, having funded or partly funded it. They will then ask for a huge percentage cut. Refusal means booting you out, as it was in my case.”

Sannoh persisted. He began to produce educational audiocassettes, which schools bought into with enthusiasm. At the same time, he discovered malpractice within Sierra Leone’s Examination Council and went on radio talk shows “as a means to ensure that the government . . . stops prioritizing corruption over education.”

But this all resulted in more pushback—hostile pushback. In 2015, Sannoh was physically assaulted with sticks and bottles. A month or so later, his apartment was attacked and his family threatened. Bowing to political pressure, his landlord evicted him. It was later shown that this harassment was fostered by the government.

Clearly, the evil-doers have not reckoned with Joseph Sannoh’s character. “It is my responsibility as a leader to fight for education,” says Sannoh. “The rights of the students in the country should be protected, and the authorities have tried on several occasions to frustrate my efforts through attacks. But that won’t stop me.”